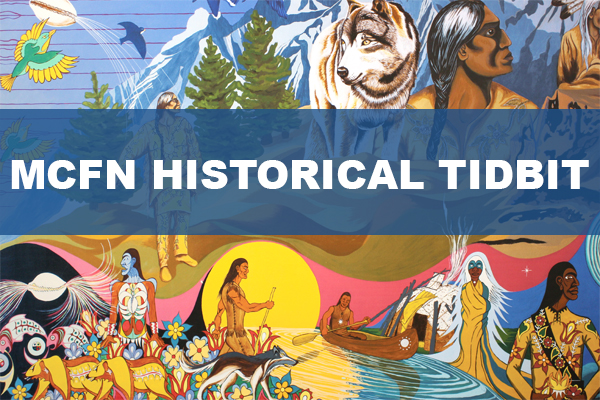 In 1812, Chief Quinipeno (1), the principal chief of the Mississaugas at 12 Mile Creek, was concerned as he reflected upon the plight of his people. His once vibrant band seemed to slowly waste away before his very eyes. Times had not been good for the Mississaugas as disease, famine, and death itself seem to be their companions. It seemed that things had begun to go awry when the Mississaugas began negotiating treaties with the British Crown. Expecting to share the land with the newcomers and live their lives as they had always done, the people were sorely disappointed with the advent of the settlers. Farms and settlements sprung up throughout the countryside with fences and ploughed fields that hindered the movements of the people. When attempting to camp on their own territory, angry farmers drove them off sometimes at the point of a gun. The newcomers polluted the waters and took more fish then they needed; hunting worsened as wild game became scarce as more settlers arrived in their lands. His people struggled to feed themselves. Quinipeno had expressed his people’s disappointment and disillusionment as she spoke on behalf of the people during treaty negotiations with the Crown in 1805(2). The feelings he expressed on behalf of the Mississaugas fell on deaf ears. To make matters worse, the Mississaugas would become involved in the war between Britain and the United States. Quinipeno needed to strengthen his people for the calamitous times they were facing.

Drawing upon the traditions of his people, Quinipeno sought to inspire his band. While alone, during a period of fasting and prayer, the chief had dreamed of a spearhead which was interpreted by him to mean that he was now invincible against arrow, tomahawk, or bullet. Soon after, Quinipeno gathered his people to inspire them with a demonstration of the gift he had acquired in the dream- just as the chief could not now not be overcome by arrow, tomahawk, or bullet, the people would not be overcome by the problems that assailed them. Taking an old tin kettle in his hands, he explained to those assembled that he would use it to catch a musket ball fired at his face. Moving a short distance away, the chief held the kettle before him and commanded one of the warriors to fire. Quinipeno lay sprawled on the grass dead. Rather then providing inspiration, Quinipeno’s unnecessary death would erode the peoples’ faith in their traditions and help set the stage for the advent of change.

The primary agents of change were the Rev. Peter Jones (Kakkewaquonaby) and Chief Joseph Sawyer (Nawahjegezhegwabe). Under the guidance of Jones and Sawyer, the Mississaugas had become fervent Methodists and began enthusiastically transforming themselves into successful farmers at the Credit River Mission Village. Interestingly, Chief Quinipeno’s own grandson, Joseph Quinipeno, born about 1815, caught the spirit of change as it took hold of the people. Joseph would have been one of the first pupils at the schoolhouse when the Mission Village was established. Rev. Peter Jones wrote of Joseph Quinipeno:

An Indian lad, named Joseph Quenchenau [Quinipeno], belonging to the Credit tribe, showed great love for his books, and was very punctual and attentive at school. But best of all, he loved his Saviour, and regularly, night and morning, offered up his private prayer to God. In the twelfth year of his age he was taken ill, when he committed himself into the hands of his Maker, saying he was not afraid to die, for he knew God would take him to heaven. After he was dead, his friends placed all his books, consisting of his Bible, Indian hymn-book, and spelling-book, on the top of his coffin, because he had loved them so much. I was very sorry to lose such a promising boy from our little society; but God saw best to take him, and therefore we must bow to His sovereign will. -from Peter Jones’s, History of the Ojebway Indians

Joseph Quinipeno, so full of promise, died young and would never witness the achievements of his people during the 19th century. For that matter, neither did his grandfather, Chief Quinipeno, see the changes that raised his people’s spirits from despair to hope. One wonders what grandfather and grandson would have thought about the changes that had taken place. Would the grandfather lament the loss of tradition; would the grandson rejoice at the “progress”? If both, were somehow able to see the Mississaugas of the Credit at this point in the 21st Century, what would they say?