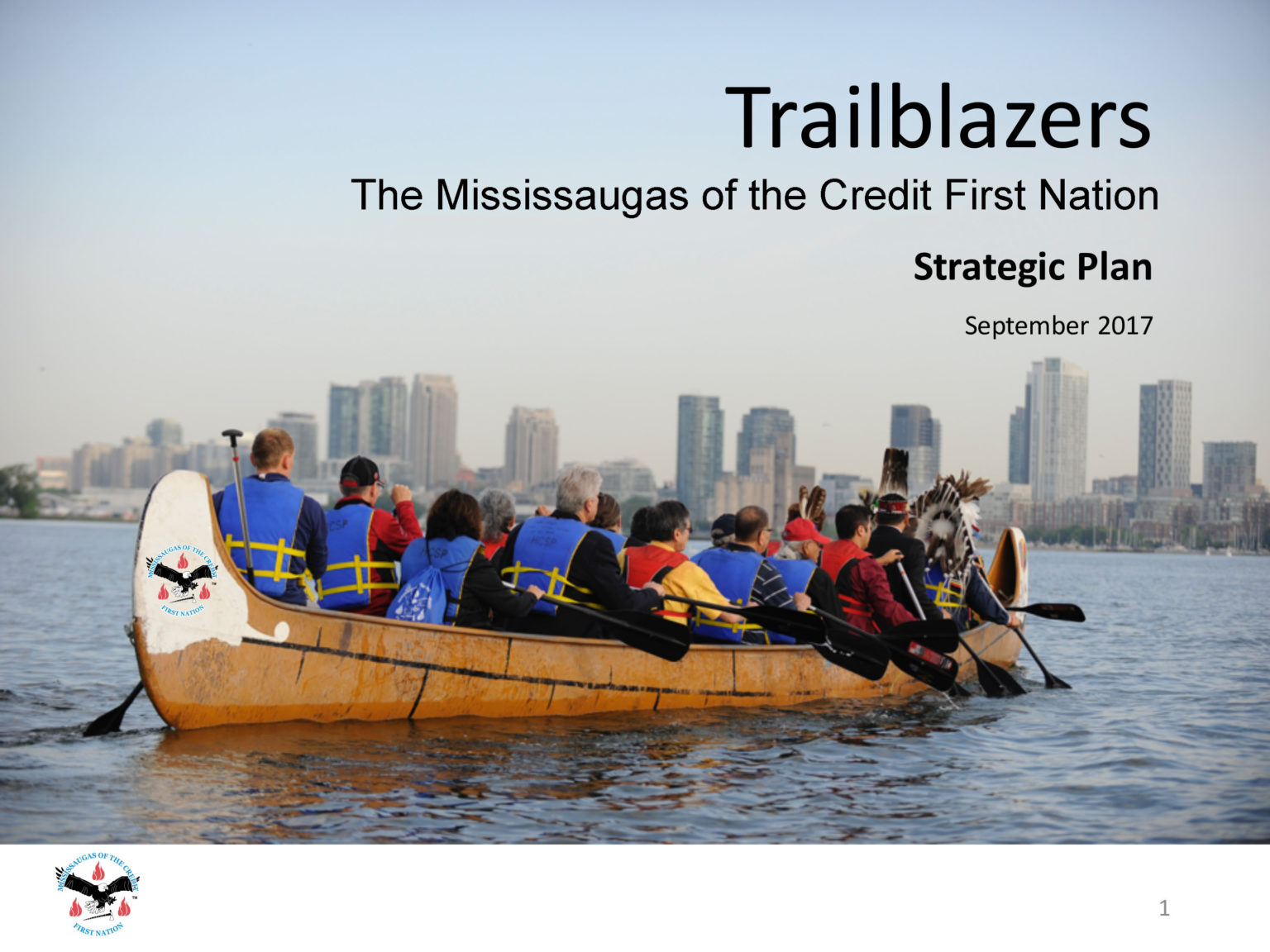 As approved by MCFN Governance Internal and Intergovernmental Council by Motion on December 9, 2019

In today’s dynamic, interconnected world of ever-changing challenges and opportunities, a clear vision, priorities and action plans matter –more than ever.

The need for our own MCFN Strategic Plan is even more paramount, given the location of our community, membership, and Treaty land and territory in Southern Ontario – and at the gateway to the Greater Toronto and Hamilton Area, the fourth largest and one of the fastest-growing urban regions in North America.

As businesses and other levels of governments develop and implement their long-term plans for their success across our Treaty land and territory, the MCFN will need to be even more strategic, informed and forward-thinking in creating a future that serves the best interests of our community and membership. A future that will both honour our ancestors, traditions and values, and our responsibility to protect our air, land and water for the generations who will follow us.

Without a Strategic Plan that we all share and are proud of, our community and membership will run the risk of “muddling through” and being reactive to the broader continuously changing economic, political and social forces which push and pull around us. And it will be difficult for our community and membership to hold the MCFN leadership accountable for progress and results towards our shared vision and goals.

Our Strategic Plan is our road map through prosperous and uncertain times ahead. We will treat the plan as an evergreen, “living” document which our membership and leaders will revisit together and adjust, as necessary, to effectively address emerging new challenges and opportunities that we can’t always foresee today.

What do we want most for ourselves and our membership from the time we have on this Earth? How do we optimize the abilities, knowledge and tools that have been gifted to us, to create a healthier, safer and more sustainable future for our children and grandchildren? Our Strategic Plan sets out a way forward in a series of interconnected priority actions, all made whole by their alignment with the broader MCFN vision.

The Strategic Plan is not for membership to build and achieve on our own. It’s also a powerful beacon and calling card that sends a strong signal to our brothers and sisters in other First Nations, other levels of government, and throughout the private sector, that MCFN is open to collaborations and partnerships with everyone who embraces the vision of broad-based, inclusive prosperity; dignity and justice for all; and a cleaner, greener planet Earth.

How will the Strategic Plan benefit us?

The MCFN Strategic Plan is more than a vision of long-term success for us to rally around, more than an assessment of the challenges and opportunities, and more than a prioritized set of implementation actions.

Our Strategic Plan is also an essential tool for communicating and marketing – to our membership, and to our potential investors and partners across our Treaty land and territory and beyond – our commitment to make our mission and action priorities happen. The allies, collaborators and supporters that we will reach out to and engage, will see clearly how they can participate and share to help achieve our vision and goals. The Strategic Plan helps ensure that everyone is on the same level of shared understanding, and is working together in alignment, towards a mutually beneficial direction and goals. By detailing the MCFN’s future goals and plans, we will also create a basis for measuring our progress and results. Over the life of the strategic planning process, we will be able to apply transparent key performance to determine our rate of achievement and success – and when necessary, make course adjustments or corrections to stay on track or blaze new trails. The bottom line for our Strategic Plan is growth — and growth in many forms: growing economic opportunities and quality job opportunities, growing our personal and membership’s health and wellness, growing our ability to protect our natural environment, growing the importance of our language, traditional knowledge and values, and growing the level of programs and services offered to the MCFN membership. If we want to grow our capacity and prospects for achieving success, a Strategic Plan that embraces our membership’s aspirations, is continuously updated and well communicated – is an excellent place to start. The MCFN Strategic Plan is not a single one-time effort nor the sole responsibility of a few people. It will be a continuous effort and process of membership engagement, review and adaptation. We will be a role model in strategic planning for other First Nations and organizations. And the plan will be our competitive and motivational edge in our dynamic region and world of possibilities and hope.

How did we develop the plan?

The MCFN Chief and Council are entrusted by the membership with the “Big Picture”: How do we layout the vision and goals that will uplift our current and future generations – economically, socially, culturally and as always with the guiding force of environmental protection and stewardship.

Our natural starting point is the timeless MCFN Mission Statement, which embodies and reinforces the four vision cornerstones that underpin the Strategic Plan:

Building up and out from the four vision statements, the MCFN and Council brainstormed to create 19 potential implementation action priorities. Why 19? We believe 19 is a good balance between a comprehensive and diverse enough suite of actions to respond to our membership’s needs and aspirations on the one hand – and a manageable, accountable volume of tasks with a realistic chance for implementation success on the other. And why these 19? They span a strong cross-section of desirable economic, educational, empowerment and environmental outcomes, and in Chief and Council’s view, aligned well with the MCFN “moral compass” of respect for our history, language, culture, beliefs and traditions.

Continuing with the “building up” process, the Chief and Council organized the 19 potential actions around seven key foundational pillars which in turn, speak to the MCFN’s four vision cornerstones. The seven pillars are only as relevant and strong as the 19 priority actions that support them. We anticipate the seven pillars may be refined or outright change over time as additions, subtractions and modifications are made to the 19 actions to address the rapidly evolving challenges and opportunities in the world we live in.

A frank and honest gap analysis – the shortfall between our abilities and limitations today, and the resources and tools that we will need to reach our full potential in the future – helped to shape our thinking about new markets, new products and services, new skills, new governance, leadership and organizational capacities. and even new mindsets to take ownership of our brighter future.

The MCFN strategic planning process will be incomplete and ineffective, however, without the deep and continuous engagement of our membership. Although this report incorporates our initial round of consultation and feedback from the membership, your ongoing participation will be essential and welcomed as we move forward on our journey to evolve and improve the Strategic Plan, and to move it from a beautiful concept to results and benefits for everyone.

The MCFN is strategically situated in the Greater Golden Horseshoe region, Canada’s largest urban region and home to more than 8.4 million people. We are also the heart of Canada’s largest regional economy: One-fifth of Canada’s GDP takes place here in the Greater Golden Horseshoe. Forming a 32,000 square-km “arc” around the western end of Lake Ontario, from the Niagara Region to Northumberland County including the major cities of the Greater Toronto Area, Barrie, Hamilton, Kitchener-Waterloo, Niagara Falls and Peterborough.

The Greater Golden Horseshoe boasts some of the highest-quality farmland in Canada and its southern location guarantees a longer growing season than in other parts of the country. Two significant, unique natural heritage features are also situated here: the Niagara Escarpment, recognized and treasured by the United Nations as a world biosphere site, and the Oakridges Moraine.

We are also home to two of the Great Lakes, Lake Erie and Lake Ontario, and the countless rivers, streams and creeks which flow into them in the never-ending journey to the ocean. We are considered to be one of the most centrally-planned regions in North America, with the provincial government’s Growth Plan and Greenbelt Plan designed to direct our rapid population growth, urbanization and land development, while protecting our natural land and water resources for future generations.

Our Strategic Plan embraces the challenges and opportunities which come with MCFN’s location in such a diverse and dynamic urban region. We will always be a leader for and role model our First Nation – and for the many partners and stakeholders who are now part of this region and our Treaty land and territory – as we blaze the trail towards increased shared prosperity and sustainability.

There is a word in the Ojibway language “Mississaki” meaning “many river mouths”. By the mid- 19th century, the Mississaugas believed they had obtained their name from the mouths of Trent, Moira, Shannon, Napanee, Kingston and Gananoque rivers.

The term “New Credit” is in recognition of the fact that the Mississaugas traded goods along the shore of the Credit River prior to the move to their new location near Hagersville, Ontario in 1847.

The term First Nation is derived from the fact that the Mississaugas are indigenous (First) people of the North American continent and are a separate nation which should be dealt with on a government-to government-basis.

The Mississaugas of the Credit First Nation are the proud descendants of the Mississaugas of the River Credit. Our Treaty land and territory extends across the prime agricultural, natural and urban regions of today’s Greater Golden Horseshoe region in Southern Ontario: From the Rouge River Valley in the east and across to the headwaters of the Thames River in the west and from the shores of Lake Erie and Lake Ontario in the south to the headwaters of the Notawassaga River in the north.

Today, our Treaty land and territory has evolved into one of North America’s largest and fastest-growing regions, and Canada’s most powerful beacon to the world for millions of people seeking economic opportunities, peace and security, and a better quality of life for themselves and their children.

The MCFN is an inclusive people and nation. Many of the proposed priorities and actions contained in our Strategic Plan will deliver enduring benefits to the people, economy and environment of our Treaty land and territory in the Greater Golden Horseshoe region. This broad, diverse and unique geography – our home – is the lens through which we draw the teachings of our ancestors and consider the options for a brighter future for all.