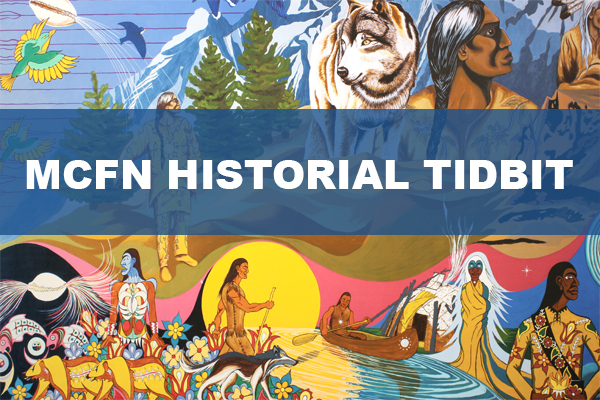 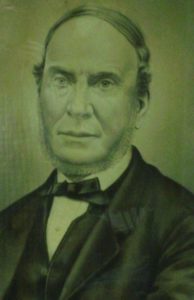 A fallen grave marker in the New Credit Townline Cemetery reads: Captain James McLean died Aug 8 1891 aged 87 years. As is often the case when one reads the stones in a cemetery, one is often drawn to wonder about the life of the person whose name is inscribed upon the monument. Fortunately, James McLean left behind records that provide a glimpse into his life among the Mississaugas of the Credit people.

Born in Scotland in 1804, McLean came to Upper Canada when he was about 13 years of age. Little is known of his early life, but one document suggests that his parents operated an Inn near the Humber River and that they later became estranged from him upon his taking a wife, Notinoqua (Sarah Thompson), from among the Mississaugas of the Credit. McLean lived among his wife’s people as they transitioned from their traditional lifestyle into an agrarian community, and would accompany his adopted people when the band relocated from the “Old” Credit to New Credit. The story of McLean’s marriage and his arrival at New Credit is provided in his own words, as taken down on May 16, 1881:

I am in my 83rd year. I have been living among and have known this Band ever since I came to this country in 1817. They were all pagan then. I married a member of this Band. In about 1821 I was married to a member of this band according to the Indian rules of marriage which consisted in my bride being given to me by her father and mother and the Chiefs. She was the daughter of an Indian called Black Jacobs. After the band became Christianized … I was married according to Christian marriage to this same woman. That was about in 1823. My wife was an acknowledged member of the Band and always was until she died. My wife owned 50 acres of land at the Old Credit before the surrender of that Reserve which I improved by virtue of my marriage to her. After the surrender I was paid for all my improvements. At the time of the surrender at the Old Credit Reserve and when it was decided to move here [New Credit] I asked in Council over which Capt. Anderson presided what should be done with the four white men who had married Indian women, meaning myself, Thomas Wood and the two Frenchmen John and Stephen Laform? Shall they remain here or shall they go with the band? … Chief Joseph Sawyer and the other Chiefs took me by the hand and arm and said ‘we want you to go with us; and it was there unanimously decided…
When the band came here the families received lands by drawing lots. I was not present at the time, but the late Chief Joseph Sawyer drew a lot for me, being the S1/2, lot 12 of Tuscarora. I refused to accept it because it was too far back in the woods. In returning home I saw some of the Six Nations chiefs and they asked me if I had drawn land. I answered that land had been drawn for me but I refused to accept it. They said there would be a Council of their Chiefs the next day and asked me to attend and they would see if I should not have land. I attended the Six Nations Council … I was given lot No 1 Con 1 of Oneida. But there was a squatter on that lot and I could not get possession of it and I took up the south ½ of Lot No.3 in the same concession instead of it.. This lot had no squatters on it but all the other lots had. During the following fall these squatters were all dispossessed of the lands and the Mississaugas took temporary possession until the locations were decided by Council. I first took possession of this lot in 1848, and my possession was approved by Council, I have held it ever since…. I have made valuable improvements, have 78 acres cleared and fenced and all necessary farm buildings.

James McLean was not one to be content merely working the farm – even while farming the land at the “Old” Credit he took an interest in doing other useful things. It is known he captained a ship on the Great Lakes for a time and partnered with the Mississaugas in a shipping venture and in the construction of the band’s own schooner- the Credit Chief. While living at New Credit, he functioned as the Indian agent for a few years, served as the band’s forest warden, and was even as a Justice of the Peace. McLean outlived his wife by 12 years and eventually settled in the west end of Hagersville leaving his farm in the care of his grandson, Oliver Wood. His descendants, primarily of the Wood family, still number themselves on the band list today.