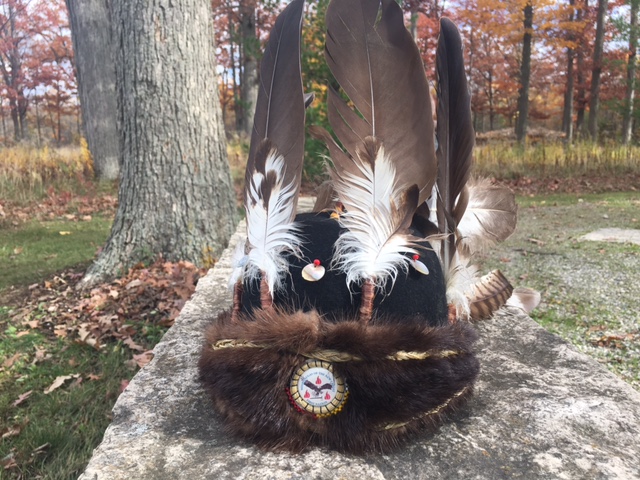 Chief R. Stacey Laforme was bestowed with a bonnet after his election in 2015. Designer Diane Smoke-Thomas, explains there is a lot of cultural significance behind the elements used to put it together.

Smoke-Thomas, a Mississauga, bear clan, traditional knowledge keeper, designed a custom-made bonnet specifically for Chief Laforme. The bonnet is adorned with a variety of feathers and animal pieces, each with a symbolic meaning behind its use and its meaning for the wearer. The bonnet features seven eagle feathers, representing the Anishinaabe Seven Grandfather Teachings.

Smaller eagle feathers are also woven throughout, “because he’s just new and being in the position as chief, I thought those small eagle feathers would represent a new beginning for him.” The bonnet is infused with sweetgrass, which Smoke-Thomas calls “men’s medicine.” “I thought hard about that to help with his mind and his decision-making.” Little abalone shells (shells that are commonly used to make smudge bowls) are interspersed throughout the bonnet. The seven shells represent the seven generations, says Smoke-Thomas.

She also decorated it with little red beads she got from an Anishinaabe Elder that are over 80 years old. Among the other feathers used in the bonnet are hawk, turkey and goose feathers. Each animal feather has a symbolic meaning, she explained. For instance, the hawk gives direction, she says. “He’s our guide; to help us to get where we’re going and [he’s] our protector.” Turkey and goose feathers were placed in the bonnet because, “those are the ones we would harvest and we would have at the feast.” There are also three small eagle feathers that sit right on top of the bonnet at the crown which were given to her by her brother. His brother was given those feathers from an Anishinaabe elder from Northern Ontario, representing the geography of the Mississauga people. “It kind of covers the whole Mississauga nation, from where we started from the Northern Great Lakes to down here,” she said. Also, she said, the north is “the healing direction.”

An otter tail is wrapped around the bonnet. “That is one of our water animals that belongs to one of the clan systems,” she said. Smoke-Thomas has been learning about traditional ways her whole life, and spent many years making crafts with her mom. She said her father told her she puts a lot of “good thoughts” into her work. “That’s what I do,” she said. “I smudge every time I do a new project. I smudged a couple of times while I was doing [the chief’s bonnet] because you have to have those good thoughts while you’re putting this all together. It was an honour to do that.”